On March 9th my mother would contact her children. Heedless of time zones, exam schedules, work obligations or social engagements, her call on March 9th was a command performance. She had to speak directly to each child. When I moved to Fredericton, New Brunswick, to complete my undergraduate studies I blithely got caught up in my studies and forgot the date.

On that particular March 9th I came down from the stacks with a book on Etruscan pottery (Art History) to find a sign printed in large, capitalized black magic marker letters at the checkout: "CHRISTINA TARI: CALL YOUR MOTHER, IT IS AN EMERGENCY". After a quick panic, I focused on the date now stamped on the card inserted in the back pocket of the book: Date Borrowed: March 9th.

The emergency was always the same. "I am calling to check that you're alive. It's March the 9th, you know. It's a very unlucky day for us. In fact, remember that the whole month is unlucky. Be careful. Don't travel. Don’t drive anywhere. Stay inside."

Over time I came to understand the annual angst. My mother’s mother and her favourite sister, Nina, were killed in a Soviet air raid on March 9, 1944. Her account of this fact was always a cause for tears. One year she announced that she had now outlived the age reached by her mother. "I guess I am going to die soon," she moaned dramatically amid tears. Seasoned by at least eleven March 9ths, I couldn't condone this logic. "Your mother died when a building fell on her in an air raid," I pointed out, "that would not constitute a natural cause of death." Logic was unwelcome on March 9th.

As a baby boomer, born and raised in the peace of a first world country, I didn't have a lot of compassion for the trauma that this date so clearly caused my mother. Frankly, the annual hysteria was often an embarrassment. I couldn't help noticing that no one else's mother seemed to freak out to this degree on any particular date. At other times it was an inconvenience. Like the years when Easter fell in March and my Dad would take my sister and me to Washington to see the cherry blossoms and the three-dimensional copper-coloured Abe Lincoln sitting in his white Greek temple, high above all those steps. We'd have to call every night to reassure my Mom that we were still alive.

In an effort to understand my mother, I asked my cousin to recollect what she could of my mother's family history. She observed that the war, and particularly the night of March 9, 1944 had fundamentally changed my mother. Apparently a naïve, happy-go- lucky, sheltered twenty-three year old, she had graduated, been engaged to marry, and had obtained a coveted posting at an electrical company— a promising career path. Then came the war and a wave of death. Her fiancé, now a soldier at the front, was killed first. Next, an air strike shortly before March 9th loosened the chandelier in my grandmother's dining room. Gravity directed the fixture downward to kill my mother's infant nephew, Nina’s son. The baby had been placed in a carrier on my grandmother's dining table while his mother was removing her coat. On March 9, 1944 my grandmother took Nina to the cinema— likely an attempt to distract a grieving young mother.

I wondered that my mother, the consummate videophile, had not gone with them. And mixed with a new understanding of the extent of the trauma that my mother had been forced to endure in such a short timeframe, and a bit of guilt at how callous I had been through the years in my reaction to her observance of March 9th, was a sudden appreciation for the vagaries of destiny: had my mother gone with her mother to the cinema on March 9, 1944, I would not be listening to my cousin’s story.

My mother had gone searching for her mother and sister on that March 9th. She'd ended up having to take shelter in the basement of a building when yet another air raid began. Remembering her manners, she'd taken off her shoes at the door, leaving them in the doorway. When she emerged, the shoes were gone. My cousin reported that she had eventually arrived at their country property, days later, barefoot, joining the family of her second eldest sister, my cousin's family, the only relatives that she could find. It was the 'theft' of her shoes that represented some turning point in my mother's mind, my cousin reported. Shoes were not easily accessible during the war and my mother's tiny foot size was very different from my aunt's. A pair of ill-fitting white summer shoes was scrounged up for her, the only pair that she would own for many months to come. For the rest of her life, my mother was incapable of throwing out shoes.

"Today," my cousin said, "every one accepts that trauma can be addressed and there is therapy. But then, any sign of mental illness was a sure ticket to Siberia or a firing squad. We focused on the need to re-establish our lives, and tried to forget the past. Be thankful that we live in a time of peace." My mother emigrated with my aunt and my cousins in August of 1944, wearing those ill-fitting white summer shoes.

In December 2001 I had the opportunity to visit Estonia for the first time. In the mad whirlwind of my life as a yuppie establishing her mark in the peace of a first world country, I didn't have time to do any research on my destination before leaving home. I bought an English guidebook in a travel bookstore in Stockholm, turning to the part captioned "Tallinn, What to See". I was surprised to find peppered references to the Soviet air raid of March 9, 1944. For some reason, it had never occurred to me that this was an event that had marked a whole country. In my frame of reference, March 9, 1944 was strictly a family event. I was stunned to find this passage:

On leaving the church, turn right to the memorial to the writer Eduard Vilde (1865-1933)…. Proceed down the steps to Harju and then turn right again. This bombed site has deliberately been left as it was after the raid of March 9 1944. The inscription commemorates the 463 people killed by the raid.

In all the observations of this date that I had endured, there had been no mention of 461 other people. For a moment I had an image of 461 other crazy mothers causing black magic marker notes to be left at the checkout in libraries around the world on March 9th. And the site was still there! Clearly, this was a site that I was not going to miss.
Finding it, however, proved a challenge. When I saw the stone pillars of the Vilde monument I knew that I had come too far along Harju Street, and must have passed it. Stopping a few young people to ask for directions proved futile. An older street cleaner stood near the monument.

"Excuse me, I'm looking for the site preserved after the bombing in 1944," I ventured.
"Ah", he responded, his bright blue eyes twinkling, "the Estonian Pompeii. Just walk this way," he pointed. "It's maybe 10 meters". But for the relative precision with which he had described the distance, I probably would have missed it again.

It was no wonder I’d missed it. How profoundly disappointing. I had expected that the site would cause me to picture the horror of that night. That I would see black, scarred, torn walls, and imagine billowing black smoke, thick, slippery, oily pools in the streets, acrid smells, and the sound of people screaming hysterically.
Instead, I stood looking at a series of ancient stone foundations, once basements, now bleached to white and cream after years of exposure to the elements, protected by a sagging, chain-link fence, on which signs in four languages recorded an atrocity:

Yet, all I felt was peace. A colourful, vibrant city was growing up behind. How appropriate the moniker 'Estonian Pompeii', I thought. Information about Pompeii from history books and articles in the National Geographic passed through my mind's eye.

This quiet, calm, bleached scene was like the voids left in those ancient Italian ruins: once animated people, now spaces useful as moulds to make plaster casts portraying gruesome deaths. March 9, 1944 was a long time ago. A point in the past. A travesty. A tragedy. A date of genocide. But a date from which new generations and a revitalized country was moving on. Proper thing, I thought. It can be far too easy to remain captive to a date best relegated to history.

-----
Anne Christina Tari was born to Estonian parents in the late 1950s and raised in Toronto.  She began the exploration of her Estonian roots in the 1990s and is delighted to share the adventure through this short story. 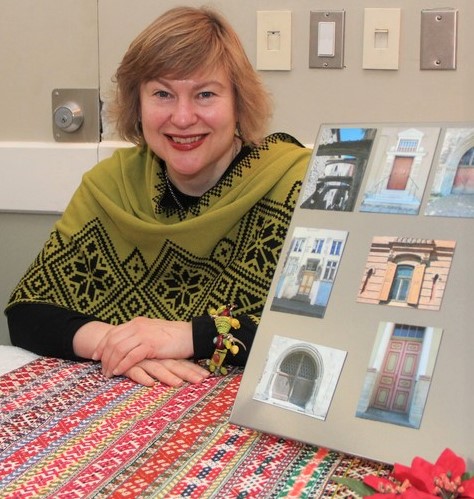