“Kas on sul valmis?”
Vanatädi is waiting outside of the door, her cane tapping impatiently on the wooden floors of the cabin.  I can hear the sigh in her voice.
“Almost,” I call back, shoving a couple of granola bars into my backpack. “How long kas me kõnnime?”
“Mitte liiga kaua.  Mu kondid valutavad.”

There’s a beat of silence as I scrabble to get things into my bag. Vanatädi pushes open my door with her foot, staring down at me impassively. “Tule välja nüüd. Sul on liiga palju asju.”

“Jah, Vanatädi,” I agree, still shoveling things into my bag. “Just a couple more things, then I-”
“Nüüd,” Vanatädi interrupts, and I get to my feet in a hurry.  “Me lähme.”

I follow her out the doorway, zipping up my backpack as we walk to the front door.

Vanatädi smiles slightly at me, and locks the door behind us.

I’m staying with Vanatädi for a few days, just until the week ends. Ema wants me to talk to her, get to know her better. We live a few hours away, so I only really see her a few days out of the year.

I don’t really know what to think of Vanatädi. Of course I love her, and want to visit more. It’s just that my Eesti keel isn’t as good as I want it to be, so sometimes it can be hard to talk to each other. We mostly sit quietly together, or bake something in silence. Rarely, we’ll read something together.  Vanatädi picks out a book in Eesti keel, I pick one out in English, and we take turns reading out the books, paragraph by paragraph. Other than that, we only really talk back and forth during these walks.

Decaying leaves crumble underfoot as I follow Vanatädi down the hiking trail. We take this walk every day, sometimes twice a day. It’s not that long, around twenty minutes. Besides, time passes faster once Vanatädi starts talking.
The air is crispy and cool. I can feel the cold setting in, the imminent snow weighing down on my shoulders. Soon it’ll be winter, and then the break will come and go, then it’ll be spring.  I make a face.  Then the bugs will come.

“Kus me olime?” Vanatädi asks suddenly, her face turned towards the forest part of the trail.  I slow down my pace, to make sure I’m still next to her.
“Metsas, ma arvan,” I respond, frowning to remember where we left off yesterday. Something about a girl getting lost in a forest? Probably. Lots of her stories are something about being lost in a forest.

The girl shivers, looking back and forth. She was cold, and a little scared, but she was sure her sõber was in here somewhere. She had gone out to find a place to paint, and hadn’t returned, so the girl had gone out looking for her. Putting on a brave face, she continues onward.

Hours pass. It’s getting darker, and the mets all seems the same. The red mittens barely block out the harsh tuul, and the ground is only getting steeper. Panting, the girl scrambles up another slope, hopelessness growing.  Her sõber is nowhere to be seen.

Ten minutes come and go. The girl doesn’t seem to notice, too focused on the ground, that seems to get more and more uneven. Her nose wrinkles as a strange stench fills the air, an unpleasant odor that seeps into every surface. She steps in a puddle, her leg sinking in up to her põlv.  With a grimace, the girl pulls her leg out.  She freezes.

Hundreds of kärbsed writhe on her leg, crawling over one another, buzzing around her, their soft bodies colliding with her leg, her face-

She barks a laugh.  “Oota.  Veel on.”  She pauses for a moment before continuing.

The girl shakes her leg wildly, her breaths heaving in panic. Many kärbsed are crushed under the weight of her leg, and many more escape, flying off into the mets. She drags herself to her feet and races through the mets, barely able to comprehend what just happened.

The ground seems to shift under her feet, and she nearly slips, as her footfalls disturb more kärbsed, the very earth rumbling with the strength of their wingbeats. They take to the air, their buzzing creating a constant drone as the girl tries to escape.

A loud, resounding crack echoes beside her, as a tree branch falls to the ground. Kärbsed shoot out of the rotting bark, pouring out into the open, all of them heading right towards her.  The girl’s heart nearly stops from fear, and she sprints, her fatigue forgotten.

The horrible decaying stench gets worse as she runs. Rotting trees collapse in on themselves, releasing more and more of the kärbsed.  The buzzing is so loud that the girl can barely hear her own breathing. A couple kärbsed get caught in her juuksed, and she shrieks, pulling at it, ripping the soft bug bodies and chunks of hair from her head.

Her leg gets caught on a fallen tree, and her face smashes into the mushy ground. Choking on dead leaves and soil, she rolls forward, still scrabbling away from the looming swarm behind her.

All of a sudden, the droning stops. The girl drags herself forward a little further, and collapses. She presses her face into the mossy ground, waiting for her heartbeat to settle down. She looks back, at the dispersing swarm of kärbsed, and frowns.  Mis juhtus?

Getting to her feet, the girl inhales sharply, realizing what she was standing on the entire time.  She takes a step back, just to make sure.

The corpse of a dead hiiglane lies beneath her feet.

“Oota, oota,” I interrupt. “What’s a hiiglane again?” At Vanatädi’s frown, I mutter a quick “Vabandust.”
“Sa tead.”  At my look of confusion, Vanatädi sighs.  “Hiiglane on suur inimene.” “Oh,” I respond, recalling the word. A giant. She was walking on the corpse of a giant. We round a corner, and I blink in surprise.  We’re back.  Already.

Vanatädi steps up to the front door and fumbles with the keys. After a couple moments, she finds the right one and unlocks the door.

“Vanatädi?” I ask hesitantly. She turns her head slightly, but I don’t see her face. “Did the girl find her friend?”

Marja-Leena Kiik is an Estonian-Canadian young writer. She enjoys practicing her writing and sculpting as a break from her schoolwork. She has participated in Estonian school at Toronto for many years of her life, and is looking to improve her Estonian through her writing. 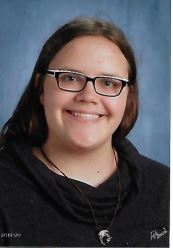 Photo: by Adege on Pixabay