I’ve always tried to get the attention of one boy. One boy who has been in all my classes since I was a baby. One boy whom everyone knows. One boy who is different from the rest.

One boy who has been my best friend since we were little. His name, Taivo Kuursaar. Everyone knows him, and no one knows me.

I am invisible and he is out there.

A couple weeks before Christmas, there was an event at the Estonian House. With Estonian School, we were performing.

Apparently, people love to hear us sing, but I don’t think we sound all that good. I was in a classroom, with the school, waiting to be called up to sing. I sat on the side, listening to my friend drone on about her Christmas holiday plans, as I tried not to hyperventilate, seeing as I hate performing.

“Ok lapsed, we will be heading out in a few minutes, so please, get into your classes and line up in alphabetical order.” the short, plump school director told us. My heart started racing at the thought of being on stage. Images of me alone on stage, in my underwear, as the crowd laughs, ran through my mind, as I walked with Kristiina, my best friend, to our class line.

“Taivo Kuursaar” our teacher called, and he walked up to his spot in line.
“Kiili Liivipuu.” They called my name, and I snapped my head up, and made my way over to my spot, behind Taivo.
“Hey Kiili,” he smiled.
“Hi.” I smiled nervously.

“Don’t worry, it’s only a couple of songs, and I don’t think anyone really listens.” he told me, in a reassuring tone. Though it did help, it wasn’t the most effective; I was still very nervous. I smiled and nodded, waiting for the director to announce it’s time to go on.

“Ok kids, I’m going to say this in English, so everyone understands.” the director said, standing up in front of everyone, on a chair. “I need the order to be from youngest kids to oldest.” She explained.

Taivo leaned over to whisper in my ear “I just think that she wants the young ones behind her so she looks taller than she actually is.”

I stifled a little laugh, before noticing classes were starting to move. Oh no. We’ll be out there soon.

“Don't worry yourself too much.” Taivo whispered into my ear, holding my hand in his. “I’ll be with you the whole time.”

He quickly let go and we followed the class out. Seeing as we were the oldest class, we were going to be the back row, and I was not complaining. As we entered the large, crowded hall, all eyes were on us. I took a deep breath, and released it, as we walked onto the stage and stood in our spot.

After the first song, I was no better. In fact, the loud, continuous claps and cheers of the audience made me feel as though all eyes were on me. Like I was left alone on stage, in my underwear.

“Hey, you ok?” I heard a whisper from beside me, and I remembered I was not alone. Everyone was still here. I turned my head to find Taivo staring back at me.

Before I could say anything, the piano started, and we had to sing. Halfway through the song, I felt something against my pinky finger. I looked down to find that it was Taivo’s pinky, rubbing, soothingly, against my own, giving me a small sense of comfort. Soon enough, he had hooked our pinkies, only to interlace our fingers, rubbing small circles on the back of my hand.

And this, this one small action, made me calmer than I had been all day. My hand was warm; my heart was no longer racing from anxiety. It was racing from the simple and small gesture.

I decided to look up to him, only to find him singing, as though nothing was going on, with a wide, toothy grin on his face. Soon enough, I looked away, back to the large crowd, to sing. And for the first time in my life I didn’t mind being up here, looking at the crowd. My mind no longer heard the crowd laughing. My mind no longer saw me, alone, in my underwear, on stage.

All I saw was me. With my school. Singing.

After the last song, my class made our way off the stage, and I never let go of Taivo’s hand. He didn’t let go of mine either.

When we got off stage, we turned to the left instead of right. I had no idea what we were doing, but I just kept following Taivo. Once we got into a hallway, he turned around and gave me a hug. A big, warm, I-never- wanna-let-go, fuzzy type of hug, and I hugged back right away, wrapping my arms around his waist, his around my neck and shoulders, since he was taller than me.

For once, I was content with everything. This was perfect. 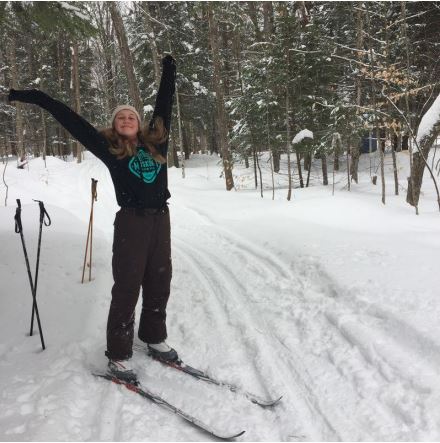 CoverPhoto by Ryan Franco on Unsplash